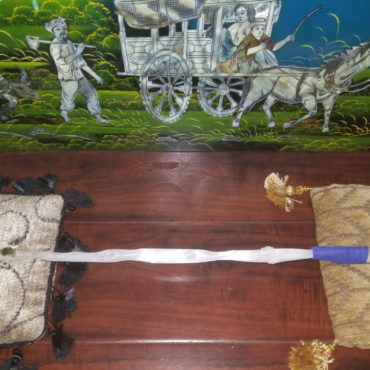 Announcing for the first time ever, we are offering our first Mushaba Energy Wand to the general public! We have wanted to create Mushaba Wands for years but were always told not to by the councils in the universe including the Mushaba Council. They spoke of many reasons as to why which I will not go into for now it isn’t necessary. Now I have been given permission to make available a limited amount of Mushaba Wands of varying types to anyone who is interested other than the students that train in the Mushaba Disciplines that become wand practitioners and wand masters.

Announcing for the first time ever, we are offering our first Mushaba Energy Wand to the general public! We have wanted to create Mushaba Wands for years but were always told not to by the councils in the universe including the Mushaba Council. They spoke of many reasons as to why which I will not go into for now it isn’t necessary. Now I have been given permission to make available a limited amount of Mushaba Wands of varying types to anyone who is interested other than the students that train in the Mushaba Disciplines that become wand practitioners and wand masters.
This wand is made of pre Selenite which is one of the few main crystals used on Planet Mushaba. It also includes another crystal used on planet Mushaba and that is the crystal Moldavite. The wand carries the energy and power of the Mushaba Energy/ Mushaba Force. This energy is connected directly to the Pool of Original Creative Force from which all things exist or will ever exist. It is prime perfect source energy.
The wand itself is made of 16” of pure selenite, with a Moldavite crystal at the tip followed by a Apatite Crystal followed by a Clear Quartz Crystal followed by a Rose Quartz Crystal followed by small fragments of Clear Quartz Crystals on each side of the wand closed to the grip. The grip or handle is wrapped in blue suede. This wand has been created under the direction of the Mushaba Wand Master, Master Octavious.
This wand is infused and energized to the core with the Mushaba energy Frequencies and also charged with the Mushaba Light. The Mushaba Light is Brilliant White, Gold, and Platinum. The Mushaba Energy in this wand is Soft Pink with Purple Spirals of energy running throughout it.
The Mushaba Energy as said, is Prime Perfect Source Energy of the Pool of Original Creative Force. It represents Freedom and Empowerment, Transformation and Change and Divine Love and Oneness all within this wand’s energy field that it emits. This wand can be used for Healing, Manifestation, Freedom and Empowerment, Transformation and Change, increase the Mushaba Energy within, opening to Divine Love and Oneness and more! The Mushaba Force Energy is a conscious thinking force that knows its purpose and reason for being called out of the Pool of Original Creative Force. It has intelligence to know what to do and what is needed when it is being used in any capacity. You can use this wand with any other modality to help make it more powerful using the Power of Original Force.
Here is a short synopsis of the crystals of the wand and what they are used for. You can look up these crystals and get more in-depth information.
Selenite:
Selenite is one of the predominant power stones of our time. Selenite serves a unique purpose in activating that aspect of our nature that is true "spiritual feeling." Attributes of Selenite include a very fine vibration that brings clarity of mind, opening the crown and higher chakras and accessing angelic consciousness and higher guidance. A good crystal for deep thought, meditation and spiritual work. Selenite is capable of recording mystical secrets written on the rays of white light. You can use Selenite to place on a client’s crown when working with them. They can also get their own for meditations at home. Place a Selenite crystal on the crown chakra because it is very potent because of its ability to help filter out ego based messages and thoughts. It is excellent for meditation and helps to clear up mental confusion and smooth out any difficulties due to unclear messages. Selenite is not like any other healing crystal or wand that focuses its particular energy on a problem. Selenite works like a tuner on a radio to discover locations of static in the aura. Selenite opens a path that allows the direction of energy into the body and its energy system that removes blockages that result in many discomforts of the body. Selenite goes to the source of physical problems and is a potent aid to healing on more than one level; it works with your subtle bodies. It has the ability to connect and balance both the physical and spiritual bodies. Selenite guides you to the area that is in the most need of clearing, balancing and healing.

Moldavite
Moldavite came from a meteorite from outer space that hit the planet and changed a substance already here on Earth. The Mushaba force energy is coming from beyond the universe and joining with the energy of Universe and Earth to transform people in a very high quality way.
Moldavite is the crystal of Transformation! It has a great power to transform.
Moldavite helps to deepen the connection with the Mushaba Force and is the best crystal to work with when using the Mushaba Energy. You can use the Moldavite in various ways such as having it on you doing your spiritual intent and service, meditating with it, hold it in your hand while calling in the Mushaba force, sleeping with it after viewing the symbol and calling in the force. You can hold the Moldavite to your heart as the Mushaba Force is a powerful heart energy. You can carry it on you along with the Mushaba symbol.

This crystal is used for Manifestation and assist one in the development of psychic gifts and spiritual attunement and also helps to deepen meditation.

These crystals also create a powerful resonance within both the third eye chakra and the crown chakra, which is the highest chakra in the physical body. The crown chakra connects you up to the soul star chakra, situated in the etheric body above the head. It brings clarity to your communication and will amplify your thoughts and may assist you by stimulating clearer thinking. It has a strong resonance, which is why it is commonly used by healers as part of crystal healing. It has a positive effect on all chakras as it protects the aura and expands the human energy field.
Rose Quartz Crystal

It is a stone of the heart, a Crystal of Unconditional Love. It carries a soft feminine energy of compassion and peace, tenderness and healing, nourishment and comfort. It speaks directly to the Heart Chakra, dissolving emotional wounds, fears and resentments, and circulates a Divine loving energy throughout the entire aura. Reawakening the heart to its own innate love, it provides a deep sense of personal fulfillment and contentment, allowing one the capacity to truly give and receive love from others.

How The Wand Works
The way that the wand works is that you as a conduit allow the Mushaba energy to come into you and through your hand that is holding the wand. The Mushaba energy then goes down the shaft of the way and as it does it takes on the quality and enhances all the other crystals that are a part of the wand. As it reaches each crystal it takes on the energy and blends it with all the other energies that it has taken on to that point and by the time it reaches the tip where the Moldavite is at, it has transformed and blended all the various energies to a frequency that will be perfect for whatever the intent of its use at the moment. The Mushaba Energy has the power to increase the power and effectiveness of any energy that it is working in conjunction with. If you have the vision to see the energies and colors that are being generated it would just simply astound you! Also to you are blending the colors of the Mushaba Energy of soft pink with spirals of purple and the beautiful Mushaba Light which is the makes up and core of the wands power.
Keep a look out for other Mushaba wands that may become available. At this time this is the only Mushaba Energy wand available and one of its kind.

There are no reviews yet.

Only logged in customers who have purchased this product may leave a review.